“When I listen to the first album now, I can hear all of the places where I was playing it safe,” Harry Styles tells Apple Music’s Zane Lowe. “I went into the second one feeling like, ‘I want to work out how to make all of this really fun.’” With his self-titled debut solo album—a collision of ’70s rock, swampy alt-country, and world-weary, introspective balladry—the British singer-songwriter transitioned from boy-band idol to bona fide rock star. The songs, all variations on an emotional theme, explored the peculiar reality of being young, vulnerable, and unfathomably famous—a lonely combination when you’re still figuring yourself out. In the two years since, Styles has made strides on this last front: He got his heart broken, holed up in Malibu and Japan, expanded his mind, wrote songs, and joined his generation in questioning whether constructs like gender and sexuality help us understand who we are. 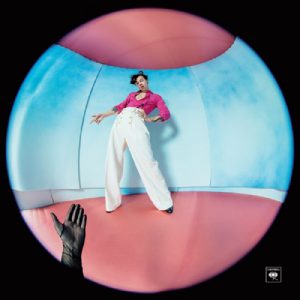 Identity—more specifically, self-discovery—is at the core of his sophomore album Fine Line, as evident on the lead single “Lights Up” (“Know who you are/Do you know who you are?”) and “Falling” (“What am I now?/What if I’m someone I don’t want around?”). As in life, these explorations take many forms: There are whistling highway reveries (“Canyon Moon”), indie folk songs (“Sunflower, Vol. 6”), and even tortured pleas (“Do you think it’s easy being of the jealous kind?” he asks on “To Be So Lonely”). Unlike his last album, Fine Line practically explodes in color. High-pitched harmonies, buoyant string arrangements, and gently psychedelic melodies evoke an almost dreamlike abandon, and once in a while he goes for broke. The wide-eyed, philosophical elation of “Treat People With Kindness”—a flurry of retro guitar and gospel sparkle—peaks when Styles lets out a howl, drags his hand across the piano keys, and signals a conga break.

As a storyteller, Styles is full of hope and devoid of pretense: He wants you, he feels good in his skin, he’s going to dance, it’s going to be all right. “Coming into this record, I wanted to feel less guarded and more joyful, free and honest,” he says. To encourage creativity and brave songwriting, he waited until the songs were finished to determine whether he’d revealed too much (and then he added more, like dialogue from an ex on “Cherry”). “Really,” he says, “I never want to trim that stuff down.” Below, he shares the stories behind three of his favorites.

“My favorite memory from making this album was the day we wrote ‘Golden.’ We were all sat in the kitchen at [Rick Rubin’s recording studio] Shangri-La, having dinner, and we played it on one guitar while everyone sang around the table. It just felt really good. Part of the thing with the mushrooms for me is that I never do anything when I’m working. I don’t even drink when I’m working. I don’t drink really at all. And when I was in the band, to me it felt like it was so much bigger than any of us. I felt like, I’m not going to be the one who messes it up. So I thought, now is the time in my life when you go out and experiment. You take this and you do that. Making this record just felt…joyous. I was with my friends and we were in Malibu and I felt so safe. Now’s the time to have fun—we’re 24, and I’m in music. I’m not a politician. We wrote it on day two of being at Shangri-La, and immediately, as soon as we’d done it, it was like, ‘Oh, this is track one.’ I used to drive to the studio, and it’s the perfect PCH song. It’s like driving down the coast is what the song is for.”

“I wanted to be true to [the breakup]. I wanted it to be true to how I was feeling then, in that moment. It was all part of being more open and not like, ‘I don’t care.’ You get petty when something’s not going the way that you want, and ‘Cherry’ is pathetic in a way. The night that I wrote it, I was feeling a lot of pressure because the last record wasn’t a radio record. I felt a lot of pressure to be making these big songs. And my friend said to me, ‘You just have to make the record that you want to make right now—that’s it.’ So we stayed up and wrote ‘Cherry’ that night.”

“One thing I hadn’t experienced before was how I felt during the making of this record. The times when I felt good and happy were the happiest I’ve ever felt in my life, and the times when I felt sad were the lowest I’ve ever felt in my life. ‘Falling’ was about falling back into one of those low moments. The chorus says, ‘What am I now? Am I someone I don’t want around?’ I had started to feel myself becoming someone I didn’t want to be, and that was really hard. But the nice thing is you get to write a song about it and be like, ‘Okay, next.’ The night I wrote it, I was going out for dinner and getting picked up by a friend. When I came out of the shower, he was playing the piano and singing, so I went and stood next to him, in a towel, and we wrote the whole thing in maybe 20 minutes. He’s like, ‘Okay, we finished it. Please go put some trousers on.’”