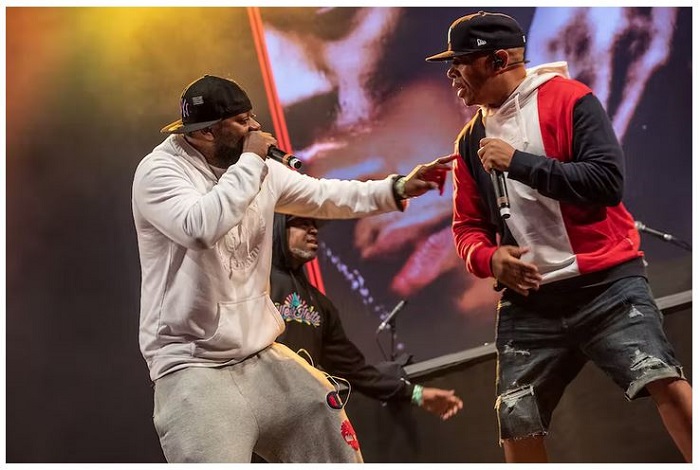 Kendrick Lamar refers to himself as Kung Fu Kenny throughout the album DAMN, a reference to Don Cheadle’s character in the 2001 buddy cop and martial arts film Rush Hour 2 starring Jackie Chan.

As all these examples confirm, it’s a common practice for rappers to equate verbal prowess with martial skill. MCs “spit” incendiary lines. Breakdancers “battle” for supremacy on the dance floor. DJs “cut” samples to their own liking. Graffiti artists “bomb” public spaces with tags.

Critics of hip-hop music and culture denounce such imagery as encouraging actual violence. They often cite graphic examples from commercial American “gangsta rap” to make their case. Yet from the research in which I have been involved, there’s a whole other way of looking at this imagery that casts hip-hop in a very different light.

Musicologist Griff Rollefson offers a different view of this tendency for hip-hop MCs to use their “words as weapons”. For members of marginalised communities, he argues, hip-hop potentially offers “a discursive and performative field in which to vent frustrations, enact fantasies, build confidence and formulate plots”. It’s a cathartic space free from threat of physical harm or retaliation from authorities.

I would argue that the metaphors of combat in global hip-hop are often concerned with messages of empowerment and social action. The seeming violence of such expressions serves as a means for practitioners to channel their dissatisfaction with adverse social conditions through creative artistry. On her 2019 track Land of Gray, for instance, South African MC Yugen Blakrok “dismembers a fascist” with her incisive “verbal blades”.

In another instance, Japanese rapper Zeebra fires off a lyrical “bullet of truth”, changing listeners’ thought patterns and “slowly directing brain cells” toward more enlightened ways of being (Saishu Heiki, 2005).

At a time when issues of migration, secession and isolationism dominate, an in-depth study of the impact of global forms of hip-hop marks an important change in political and cultural perspectives. As part of the CIPHER initiative, Rollfeson, the researcher Jason Ng and I are investigating hip-hop’s social importance and re-evaluating its stigmas. The aim is to shift the focus from a strictly US context to look at models from around the world.

Rollefson’s idea that hip-hop is a “martial art” is a part of this approach. Not only does it position rap within its contemporary context but it also considers the culture’s deep indebtedness to Kung Fu cinematic lore and East Asian philosophy.

Busta Rhymes’ video for the 1997 track Dangerous, directed by Hype Williams (who made some of the period’s most well-known hip-hop videos), takes its inspiration from the 1985 classic The Last Dragon.

Ask any old-skool hip-hop head “Who is the master?” and they’ll answer, “Sho’nuff!”. This scene is played out in the music video with Rhymes taking the role of martial arts master Sho’nuff. For brown and black kids growing up in the socioeconomically repressed Bronx of the 1980s, what’s a more aspirational narrative, what’s more hip-hop, than the tale of a lone warrior acting decisively, but only when provoked?

This influence also manifests globally, but in very different ways. Irish MC Jun Tzu (his nom de guerre a nod to Chinese military strategist Sun Tzu), often highlights the continued need for unity in his hometown of Belfast after the Troubles. In the single Klik Klak – the title imitating the sound of a pistol being racked and readied to fire – the South African rapper Cream declares: “I’m Jackie Chan with a pen… I defend rappers in my clan…”

Just as martial arts principles are handed down from teacher to disciple, hip-hop MCs spread ideological “truths” through their music. Global practitioners of hip-hop in particular prioritise a resistive aesthetic – an awareness of cultural identity, personal expression and a fundamental “knowledge of self” in their work.

The notion of hip-hop as a martial art also helps to illustrate the community-oriented ethos of the culture. In the cipher, which is the name given to hip-hop performance gatherings, MCs hone their skills and “sharpen their blades” in lyrical combat. This rite of passage, where performers are called on to demonstrate their talents and be evaluated by peers, exemplifies the “each one teach one” approach that characterises much of global hip-hop.