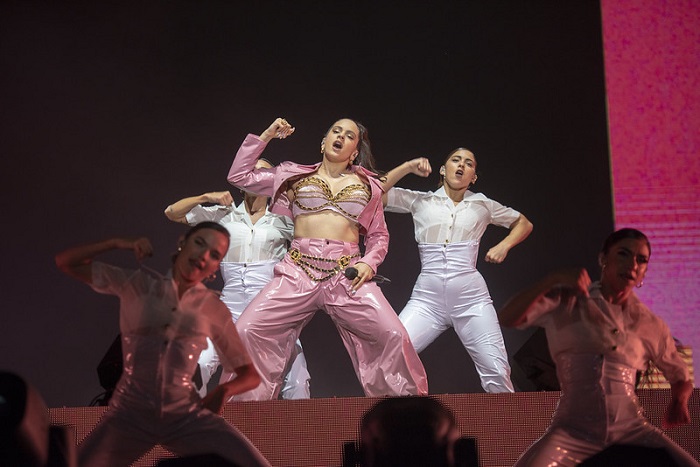 Rosalía: Raising Reggaetón’s ‘Global Cachet’ Or Robbing It Of Its Roots?

Spanish singer Rosalía’s new album, Motomami, has received a lot of media attention for its melding of “every sound at her disposal”. Grounded in her flamenco background, the album sways from pop to jazz, is inflected with hip-hop and reggaetón beats and even features elements of bachata and salsa.

Rosalía rose to mainstream visibility in 2018 when her studio album El mal querer (The Bad Loving) landed in Rolling Stone’s 500 Greatest Albums of All Time. But the recent comparison by academics of Rosalía’s rise to fame with the “evolution of reggaetón from its Afro-Caribbean roots to a genre with global cachet” speaks to the silencing of the music’s rich socio-cultural history.

Rosalía is not alone, however. Throughout the 2010s and into the 2020s, there’s been a slew of popular songs by white and European Spanish artists that borrow heavily from aLatin and Caribbean music while erasing its Black roots.

Reggaetón and the ‘Despacito effect’

Reggaetón is an Afro-Caribbean music genre with a complex history of musical encounters between Panama, Jamaica, Puerto Rico, the Dominican Republic and New York. Influenced by and built upon styles as diverse as dancehall, hip-hop, merengue, reggae and rap, reggaetón’s roots are in the African rhythms that were carried over during the colonisation of the Americas.

In the 1990s in Puerto Rico and the Dominican Republic, reggaetón became a vehicle for Black resistance against strict racial hierarchies, oppressive social structures and police brutality. But as the global popularity of the music has risen, reggaetón has become increasingly “white-washed.

An obvious example of this was when Canadian artist Justin Bieber featured in a remix of Puerto Rican artists’ Luis Fonsi and Daddy Yankee’s reggaetón hit Despacito in 2017. Despite the original version’s enormous popularity, Bieber has often been credited with its mainstream success.

This so-called ”Despacito effect“ echoes broader patterns of appropriation and consumption of Caribbean music genres by Euro-American markets – and the resulting exclusion and marginalisation of their founding figures.

One of the most famous examples of this in Latin music is Enrique Iglesias’s collaboration with Cuban duo Gente de Zona and singer/producer Descemer Bueno in the 2014 remix of Bailando. The track is the Billboard’s Hot Latin Songs chart’s longest-running number one. As American Studies scholar Petra Rivera-Rideau has argued, Bailando allowed Enrique Iglesias to reinvent himself as a hip Latin urban singer by relying on Afro-Latino cultural markers – in this case, reggaetón – while simultaneously embodying Latino whiteness”.

The creative and commercial construction of a white Latino image by European artists who produce reggaetón is more than simply whitewashing. The shared language might impart a sense of authority and authenticity to these Spaniards. But we must remember that this language is shared precisely because of Spanish colonisation.

Rosalía’s success in the “Latin” music market as a Spaniard has been met with accusations of cultural appropriation – a term used to describe the thoughtless adoption of elements of a culture or cultural identity by someone who does not belong to it. Such accusations were particularly loud after the release of the distinctively reggaetón track Con Altura in 2019. The song was also made in collaboration with Colombian singer J Balvin –- a white artist who recently unabashedly accepted an award for “best Afro-Latino artist of the year”. The issue deepened after her subsequent appearance on the cover of Vogue Mexico as a “Latina artist” (Latino/a refers to someone of Latin American heritage living in the US). The criticism gave rise to important debates about race, class and privilege in Latin and Spanish music.

Talking about Rosalía’s hit Malamente, the Spanish rapper C. Tangana said: “[Reggaetón is] very valuable to urban culture and Spanish culture. It’s helped people think different, look for a different sound”. Thanks to Rosalía’s whiteness and Europeanness she has received credit for bestowing Latin culture with an “originality” and “value”. However, that comes from harnessing and combining music rooted in cultural and ethnic backgrounds to which she does not belong.

These colonial legacies of inequality and white privilege can be seen very clearly in Rosalía’s collaboration with Dominican rapper Tokischa on the hit song Linda. Here, explicit references to Rosalía’s Spanish heritage are made in an Afro-Dominican space upon which she can capitalise and over which, as the lyrics go, she is “ruling”.

Rosalía is not Latina. Also, the since-renamed “urban” award is a racially marked category into which Black artists – be it of reggaetón or other genres – have been pigeonholed. Competition in the Latin Grammys’ “Big Four” (album, record and song of the Year and best new artist), on the other hand, has been dominated by white artists, who have also been able to win in “urban” categories. Practices of exploitation and discrimination embedded in the music industry are irrefutable. White artists have beaten Black artists on an incredibly uneven playing field.

When we recognise reggaetón’s rich and complex cultural history, it becomes obvious that Rosalía is not raising its “global cachet”. And as reggaetón continues to gain visibility on the global stage without its history, we cannot overlook the injustices that have been imposed upon its creators throughout its international boom.

Reggaetón historian Katelina Eccleston (aka La Gata) is one important figure who deserves our attention. As Eccleston makes clear in her recent article on J Balvin’s participation in the reggaetón scene, “this social responsibility doesn’t fall on one person”. It is down to musicians and industries, scholars and audiences alike to elevate, celebrate, and preserve its roots. So, when we’re performing, analysing, or dancing along to the next hottest reggaetón hit, let us remember where it came from and be critical of who is performing it.