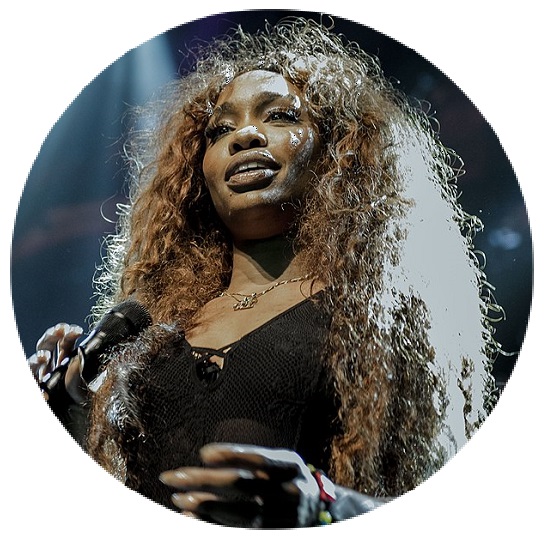 Solána Imani Rowe, known professionally as SZA, is an American singer, rapper, and songwriter. In October 2012, SZA self-released her debut EP, See.SZA.Run, which she then followed up with her second EP, S, in April 2013.

SZA’s first studio album, Ctrl, was released on June 9, 2017, to universal acclaim from music critics. It debuted at number three on the US Billboard 200 and was eventually certified platinum by the Recording Industry Association of America (RIAA). “The Weekend” from her Ctrl album peaked at #29 which is her highest charting solo song.

The album and its songs were nominated for four Grammy Awards, while SZA was nominated for Best New Artist at the 60th annual ceremony. Ctrl was ranked as the best album of 2017 by Time. SZA collaborated with Maroon 5 for their 2017 record “What Lovers Do,” earning SZA her first US Top 10 on the Billboard Hot 100. She later followed that by featuring on the 2018 Black Panther record with Kendrick Lamar, “All the Stars,” which peaked at number 7 in the US and was also nominated for the Golden Globe and the Academy Award for Best Original Song.

Until a late flurry of percussion arrives, doleful guitar and bass are Solána Rowe’s only accompaniment on opener “Supermodel,” a stinging kiss-off to an adulterous ex. It doesn’t prepare you for the inventively abstract production that follows—disembodied voices haunting the airy trap-soul of “Broken Clocks,” “Anything”’s stuttering video-game sonics—but it instantly establishes the emotive power of her rasping, percussive vocal. Whether she’s feeling empowered by her physicality on the Kendrick Lamar-assisted “Doves in the Wind” or wrestling with insecurity on “Drew Barrymore,” SZA’s songs impact quickly and deeply.