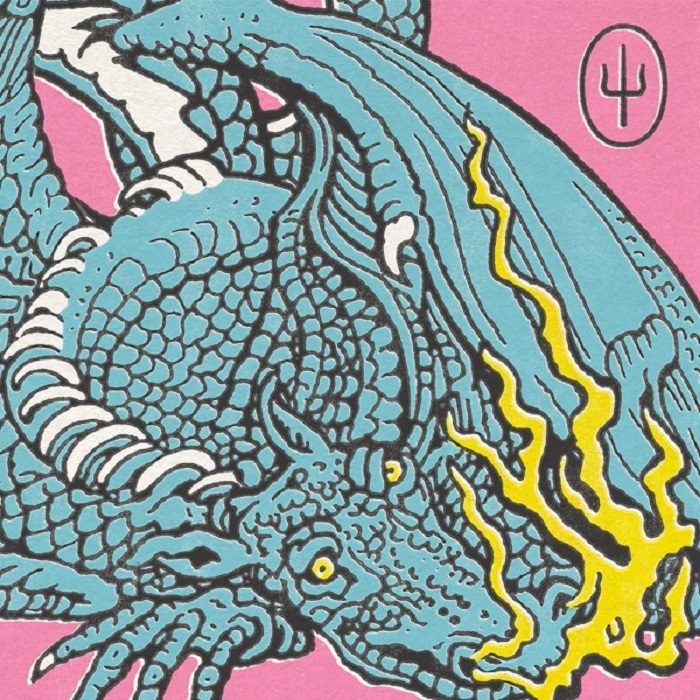 The title of twenty one pilots’ sixth LP is a play on “scaled back and isolated,” words that summed up frontman Tyler Joseph’s world as he wrote and recorded in his Ohio basement during lockdown. “It just felt very confined,” he tells Apple Music. “I had this little dragon figurine that I kept on my desk during the entirety of the writing process, and I just knew that when you focus on even the tiniest little detail in your room—or wherever you’re confined—that thing can come to life and fly around your room. That dragon on the cover really represents what can be accomplished with that sort of imagination.”

And as has been the case for everyone, the challenges of pandemic living had a noticeable impact on Joseph’s work—but maybe not quite how you’d expect. “I was actively trying to push against that natural inclination to come in darker,” he says. “The idea of adding to the pressure of what’s going on in our world, it didn’t feel right.” Instead, Scaled and Icy finds Joseph pushing his genre-defying alt-pop into brighter, more hopeful territory. “It felt like I needed to go the opposite direction,” he says. “I wanted to escape a little bit more and provide people with that opportunity to escape too.” Here, Joseph takes us inside some of the album’s key tracks.

“Good Day”
“I designed it to feel like something was coming to life. If you really listen to the song, it’s so upbeat and shiny on the surface, and then lyrically I’m talking about trying to cope with the idea of if I were to ever lose my family and friends. I would probably go through a period in the mourning process where my reaction to anyone asking me how I’m doing would be like, ‘I’m fine. Everything’s great, I don’t even know why you’re asking me.’ Making them feel stupid, like, ‘Why would you even ask me that?’ That’s what this song is.”

“Choker”
“I come from a basketball background, and choking is: You’re standing at the free-throw line and you need to make one of those two, and if you miss them both, you choked. I think for me, with certain friendships and relationships, there were moments that I could have risen to the occasion and I didn’t, and that’s something that I’ll have to live with. I think that everyone has those moments where they feel like they choked. The song is trying to work that through and trying to figure out if that’s someone that I was born to be. Can I shape this? Is this something I can turn around?”

“Shy Away”
“My brother said, ‘Hey, I just want you to show me, from the beginning, how you start a record. How do you start writing a song?’ So I had him over at the studio. A lot of times when I sit down to start, I’ll tap into my phone and I’ll have a bunch of voice memos of ideas that have hit me randomly. Sometimes it’s just a single word, sometimes it’s a melody. I started to build up the track from there, and it turned out that it was talking about wanting him to pursue his dream of chasing music. Most of my songs are very inward, but this is one of the few that I feel like the message is outward, coming from me. The only thing harder than figuring out what your purpose and identity is, is watching someone that you love trying to figure out theirs.”

“Saturday”
“When you strip away what day of the week it is, you lose your rhythm. You lose your sense of what is up and what is down. And that’s a lesson that [drummer] Josh [Dun] and I learned pretty quickly on tour, because a Friday night and a Monday night could feel the exact same, whether or not we had a show. When the pandemic happened, everything’s shut down, everyone was starting to learn that same lesson, where the days of the week lose their meaning, and it was messing with people’s reference of time. You feel like you’re swirling and your feet aren’t planted. The song is really, I’m talking to my wife, hoping that she sticks with me, even though I’m working through this, even though I’m kind of tumbling into nothingness.”

“No Chances”
“I recruited my brother and a few of his friends to come over and record gang vocals. You have this microphone in the middle of the room and I have everyone in headphones and I’m kind of directing them in what to say and what to yell. That was the first time I’d ever really produced a room full of people. I was thinking of athletics and college sports specifically, where there’s overwhelmingly this hometown crowd, and how intimidating that can be and powerful that is in the face of opposition. I definitely was writing from that—I felt the energy of a gymnasium or a stadium and was wanting to capture that.”

“Redecorate”
“I had a friend of mine whose son passed away and they would keep his room the same way that he had left it. I remember thinking how crazy powerful a story that is, and how it makes me wonder, like, ‘What will people do with my stuff?’ It can actually bring you back down to earth, make sure that you don’t make any horrible decisions. I’m realizing now how difficult it is to talk about, but this song is really important to me. I love the messaging of it, and I hope that our fans hear what it is I’m trying to say in it. Because it is a bit delicate, but it’s one of my favorite tracks and it’s pretty powerful if you let it.”