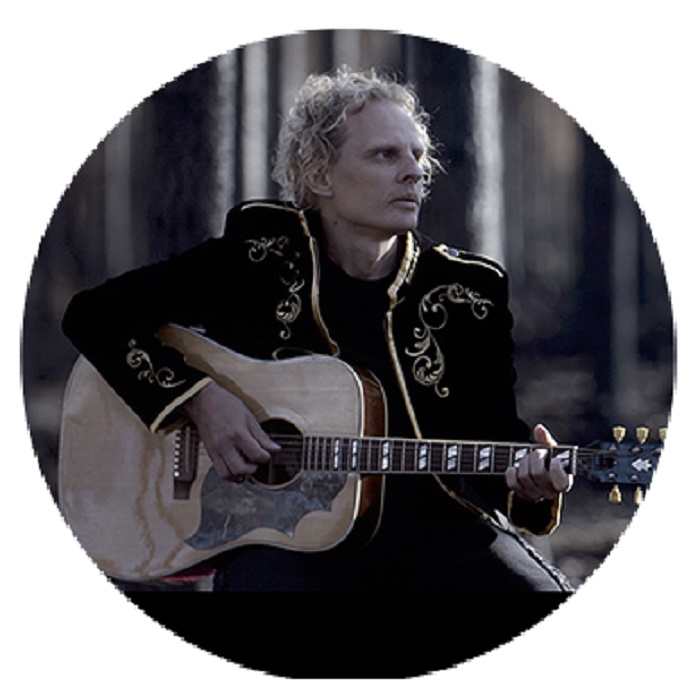 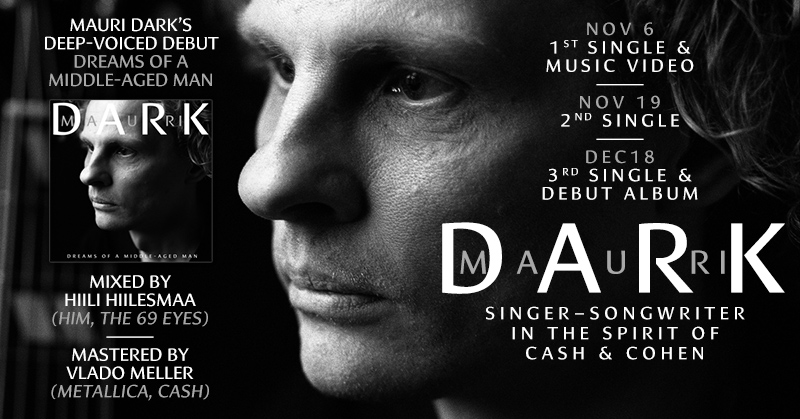 On December 18th, 2020, Turku-Finland based singer/songwriter and iTunes chart-topper Mauri Dark released his debut album, Dreams Of A Middle-Aged Man. Dark is also released “Poison Woman,” the third single and (lyric) video from the album. This new single and video follow Dark’s November 6th debut with the title track and the November 19th second single release, “Thin Line Of Understanding.”
“Poison Woman” is a rock-spiced, up-tempo song from the dark, folky debut. 70s drums, bass, Western movie-ish electric guitar and a doomsday piano are the framework for Mauri Dark’s acoustic baritone guitar and deep, low voice. After five albums and hundreds of shows, the frontman for metal duo, Mystons (born Mauri Kosonen, 1978) has stepped into the bare boots of a vulnerable acoustic storyteller. “Poison Woman” is the first song written for his debut.“Poison Woman’ is the end song of my 7-year relationship. It is about two people who brought out the worst in each other. It could as easily be ‘Poison Man’ written by the other half,” Mauri Dark says. “I wrote it when I was living alone in a forest cabin in Finland in 2016. My mother had stage 3 cancer, and the word ‘poison’ came from the treatments. She died on May 27, 2017. 364 days later I was happily married, and our firstborn daughter was born. This roller-coaster of life wrote my debut album.”“POISON WOMAN” OFFICIAL LYRIC VIDEO:

Dreams Of A Middle-Aged Man, the album, was written, produced, recorded and performed by Mauri Dark. The sound was crafted with Mixing Engineer / Associate Producer Hiili Hiilesmaa (HIM, Apocalyptica), Mastering Engineer Vlado Meller (Metallica, Johnny Cash) and Associate Producer Jussi Vuola.The road to recognition has been fast since the November 6th, 8-minute debut single “Dreams Of A Middle-Aged Man”. Its 12K-viewed music video, directed by Vesa Ranta, was selected for the Sweden Film Festivals Finals. The November 19th single “Thin Line Of Understanding” has 21K Spotify listens. Worldwide radioplay, playlist adds, dozens of stories, interviews and flattering reviews can be summed up with Jamsphere’s “a deeply affecting sound experience.”Mauri Dark recently teamed with reputable US Manager / Promoter Michael Stover of MTS Management Group / MTS Records (IMEA Artist Manager of the Year in 2013, 2014, 2017, 2018, 2019).The album is founded on Mauri Dark’s experience: 25 years of songwriting, 8 albums, and 500 shows with different bands and instruments. Strong compositions and lyrics are led by Mauri’s low voice and backed by acoustic baritone guitar, with varying moods and soundscapes. The atmospheric, discreet backgrounds are built with acoustic instruments such as piano, pump organ, cello and upright bass, adding electric guitar ambience (á la Pink Floyd, Ennio Morricone’s Western soundtracks, blues and jazz), and acoustic drums and electric bass on two tracks.“Dreams Of A Middle-Aged Man is a dream come true record,” Mauri Dark says. “It combines everything I have learned about music and life. It is emotional, sincere and timeless acoustic album full of moods and stories in the spirit of Johnny Cash, Leonard Cohen and Nick Drake. I made it with the best professionals simply for the love of music.”Dreams Of A Middle-Aged Man album is released on December 18 via EluccaArts on digital, CD and vinyl LP formats.Tracklist:01 Poison Woman (3rd SINGLE, LYRIC VIDEO & FULL ALBUM Dec 18)02 Worst Enemy03 X-Renegade04 Love Will Prevail05 Shades Of Gray06 Chains Of Solitude07 Hymn For A Wanderer08 Thin Line Of Understanding (2nd SINGLE Nov 19)09 Up To Us10 Dreams Of A Middle-Aged Man (1st SINGLE & MUSIC VIDEO Nov 6)