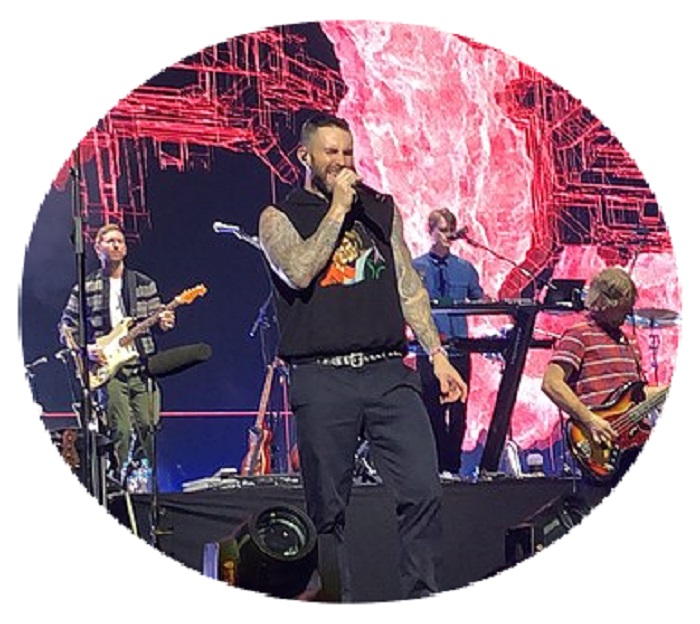 “At this point, we’ve made it,” Maroon 5 frontman Adam Levine tells Apple Music. “We’re not trying to do anything to make it any further, not trying to just make a buck. We’re trying to do things to challenge ourselves, to move people in the right ways. We’re trying to make great music that stands the test of time.” On their soulful seventh LP, the pop-rock giants pay tribute to longtime manager Jordan Feldstein, a childhood friend of Levine’s who died suddenly in late 2017. JORDI feels like a work born of new perspective, its mood contemplative throughout—whether Levine’s expressing appreciation for a doomed romance (“Beautiful Mistakes,” featuring Megan Thee Stallion) or a deep connection (“Lost,” the Pachelbel-indebted 2019 single “Memories,” also dedicated to Feldstein). “Lyrically,” he says, “this one gets introspective and personal. It’s just the time we were making it—it was a strange, very reflective time for everybody. And it seeped into the music, I think, in all the right ways.”

But also notable is the band’s choice in collaborators here, from the pop-punk pedigree of blackbear (“Echo”) to the timeless charisma of Stevie Nicks (“Remedy”) to the Latin influence of Tainy and Añuel AA (“Button”) to haunting contributions from late rappers Juice WRLD (“Can’t Leave You Alone”) and Nipsey Hussle (a YG-enriched remix of “Memories”). Feldstein had been a fan, Levine says, so every choice in feature had special meaning. “He was my partner, my guy,” he adds. “There was no one else, it was just the two of us. His family is basically my family. I really didn’t want to have to talk about this all the time, but I also would have probably really regretted not naming the record after someone who was the most important figure in our band’s trajectory, life, career, everything. I miss him every single day of my life, and I’ll never fill that hole, ever.” Here, Levine takes us inside a few of the album’s key tracks.

“Beautiful Mistakes”
“We were spending summertime in New York, and the wonderful and talented blackbear wanted to write a song with us. The hook he wrote—this great chorus hook, and, I mean, the whole song is a hook—I feel like that’s how you know you’ve got a good one, when the whole song’s a hook. When we were recording, I played it for Travis Barker and I was like, ‘It kind of reminds me of an old Blink record.’ But I’m going to call it Blink-hop, because it’s kind of got a Blink feel, and that kind of angstiness, but it also has a hip-hop thing going on. It’s like this weird hybrid of different styles from my past.”

“Lost”
“‘Lost’ is actually one of my favorites we’ve ever done. I think it just captures everything the band stands for, all in one song. Whether you liked us back then, whether you like us now, whether you’ll like us later, I think this is kind of a classic sound that we’ve always had. And the song, the lyrics actually were a great process and I worked a lot. They took a while, and that’s, to me, the most important contribution I think that I made to any record. Just sitting with them and really trying to make sure everybody understood what I was saying and not trying to shroud it too much in any metaphor.”

“Remedy”
“Stevie’s one of the all-time greatest. And I’ve always had a wonderful friendship with her. I love her so deeply. J Kash [songwriter Jacob Kasher] and I were talking and he’s like, ‘What do you think about Stevie Nicks for this?’ I didn’t even think twice, really, because the song definitely makes sense for her, but I had not thought of that angle. It always winds up being the best decision when it’s the right one. And with her, it’s like it was made for her.”

“Convince Me Otherwise”
“Getting it right is all about feeling it out and really thinking of all the dream people you could imagine for this stuff. Like the way that it worked on ‘Convince Me Otherwise’: H.E.R. was perfect. Gabi [Wilson] is the greatest—she’s one of my favorite new artists. Every feature I listened to—even with Nipsey and YG on ‘Memories’—there was a meaningful thread attached to it, because of the things that had gone down and what the song was about. What it meant to me, what it would’ve meant to my manager to have them on that song because he was such a fan. Everything winds up working in the right way when you take the time to think about it.”

“Button”
“That’s always been one of my favorite songs. We actually recorded it a couple years ago. It was a different song, but Tainy actually brought it back to life so much that it made it even more of a contender. We weren’t sure: The Anuel verse was incredible, but it needed that little umph. There was something it needed, and it never really had it, and Tainy is good at that. That was all him, and that was a great moment.”