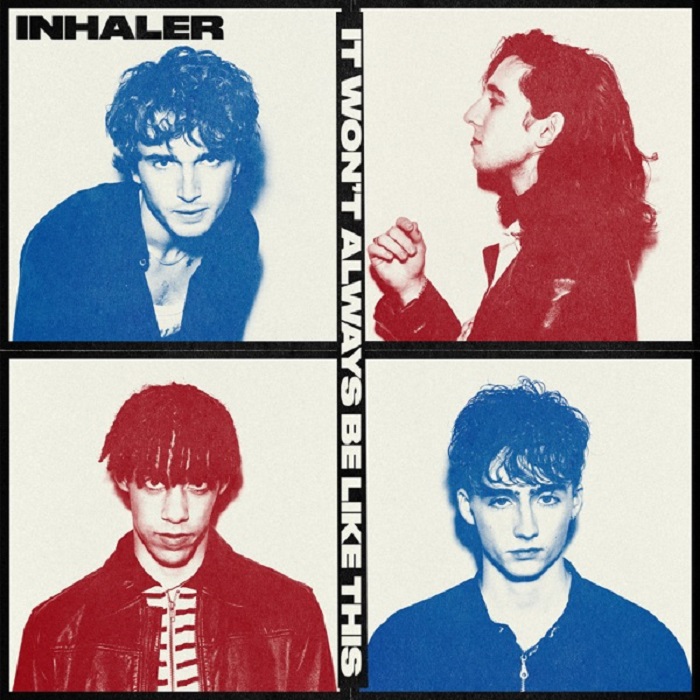 When the first lockdown arrived in March 2020, it knocked Inhaler into a period of uncertainty. The Dubliners had established themselves as one of Ireland’s most exciting new bands on the back of their live performances, and they were midway through a support tour with Blossoms that had shown them to be perfectly at home in arenas. Suddenly, though, the four-piece were confined to their parents’ houses, wondering what gigs would look like in a post-pandemic world. With little else to do, they started writing songs, firing ideas to each other across digital channels. The music that emerged added new depth to their melodic indie rock; some tracks brooded and reflected, others itched with frustration, and all of them revealed a broadened worldview. “When we got into the band after school, [it was] to not grow up,” singer/guitarist Eli Hewson tells Apple Music about a decision that unsettled his parents, who wanted him to go to college. They came around, he says, when they realized how good Inhaler was—an opinion worth noting given that his dad is Bono. “And we didn’t have to grow up for two years because we were on the road,” he says. “The lyrics were inspired by teenage things like the girl you liked or a party you were at. When lockdown happened, we all matured as people. We had to. We told ourselves, ‘If we’re ever going to talk about our surroundings and the world, now is the time.’” A debut album that was originally scheduled to be a collection of previously released singles and live favorites, recorded in snatches between gigs, became a much richer, more considered piece, assimilating dream pop, funk, and psychedelia into their world. “Part of the fun about being in Inhaler is that we’ll never find our sound,” says Hewson. “Lockdown did give us that extra space to push it further.” Let Hewson, drummer Ryan McMahon, guitarist Josh Jenkinson, and bassist Rob Keating guide you through it, track by track.

“It Won’t Always Be Like This”
Ryan McMahon: “That was the first song we wrote together. What’s been interesting is how the title is being interpreted by different people. We can see in comment sections that there’s people going, ‘Yes! It won’t always be like this. They’re dead right.’ And then other people are like, ‘It won’t always be like this? Yeah, it could get a lot worse, lads.’ It’s doing what songs should do—have a different meaning for a different person, depending on whatever point they’re at in their life.”
Eli Hewson: “I still have on the old computer, on GarageBand, a little of that riff in there from 2016. I remember playing it in the room together for the first time and the drums being a hook. That was like, ‘Oh man, that’s catchy.’ The first time we wrote something catchy.”

“My Honest Face”
EH: “It fits into the theme of getting lost and finding yourself again, because it was all about finding out what you wanted to say onstage and what kind of people we wanted to be as performers, and that first experience getting up there and that kind of shock. So it’s an important part of the story of the album.”

“Slide Out the Window”
RM: “That was one of the first lockdown tracks to really happen. Sonically and rhythmically, it’s quite left-field from anything that anyone will have heard from us before. I remember hearing that beat in the song that someone had done on Logic: I thought, ‘Oh no, this is going to be a nightmare. I have to go away and learn this now.’”
EH: “It was written in the spring, and it reminds me of being in my bed, staring out the window over lockdown, just daydreaming and wishing that we were somewhere else.”

“Cheer Up Baby”
EH: “We were in the studio, kind of wondering, ‘Fuck, “Cheer Up Baby,” are we going to be able to say that? Are people going to be annoyed at us for saying it in a time like this?’ But it just made sense. Our fans are in love with that song. We’re in love with it. And every time we play it, they sing at the top of their lungs. So it really was a big moment for not just us but our fans, I think, to get their hands on that one.”

“A Night on the Floor”
EH: “That’s one that we’ve been playing for a long time. We came into the studio one day and Ant [Genn, producer] was messing around with what we had done, and he’d done the intro part with all that kind of crazy psychedelic stuff. We were like, ‘Oh my god, there it is. That’s the identity of that song.’ [Lyrically it comes from ] the news. Looking at our phones over lockdown and just horror after horror. And most of it is inspired by stuff we’d seen over in America. We had such a really, really special time going over there, and we all fell in love with it again when we went on tour with Blossoms. And it’s just sad to see America in that kind of state, because it symbolizes so much to us. It feels like, I guess, the States is having a bad hangover or something. It needs to get off its arse and have a coffee or something.”

“My King Will Be Kind”
EH: “It’s kind of playing a character. I’d watched a documentary on incels. There’s so many people in our generation that are so easily taken into extreme groups or fads. A lot of people don’t really have any room for the other side of an argument. And that’s what the song is trying to touch on. It was originally more of an Interpol-y-type thing. But it really did take shape in studio with the acoustic guitar.”

“When It Breaks”
Josh Jenkinson: “It came from being stuck in the room I spent my whole childhood in, and having gigs stripped away, and just longing to play that type of music and make that type of music.”
RM: “It was in contrast to that midtempo feeling that we’d been experiencing with ‘Slide Out the Window’ and ‘My King Will Be Kind.’ Those were songs reflecting our moods about being at home. ‘When It Breaks’ is us very much itching to get back to that place that we were at. It was written at a time where coronavirus was at its peak, Black Lives Matter was happening. Everything was a little bit up in arms and crazy. And so this was [Eli’s] observation on it.”
EH: “It’s asking if there was an end to this whole crazy scenario that we’re in, what’s going to be on the other side, and are we going to change anything?”

“Who’s Your Money On? (Plastic House)”
EH: “It’s about the future of the band and how much we want it. Maybe our relationships had taken a bit of a strain because we’d been in the studio for so long and there was a lot of pressure and a lot of work, and we weren’t really hanging out—it felt more like we were there to do a job. This is us talking to each other, being like, ‘This is a gamble that we’re going to take. Gigs may never come back again. We may not be a band. But we’ve got everything to lose and everything to play for.’”

“Totally”
EH: “It feels like a big pop song, but it’s a different type of pop song than we had written before. It’s funny because we weren’t playing live, but it feels like it would be such a great festival tune. I guess we were imagining what that could look like—where are we going to be playing it, what moment in the show is it going to be? For us, this is the hold-your-mates-at-the-end-of-the-gig one, going ‘Waaaaaayyy!’”

“Strange Time to Be Alive”
Rob Keating: “It used to be a full song and it turned into an interlude. It has only got the one lyric, a little message to have towards the end of the album. And we thought it worked really well with the ending song as well. We jammed it together in the studio.”
RM: “It was Ant who spotted it. It was the chorus of this demo that Rob was writing. He was like, ‘We need to get that on the album. That’s going to resonate with so many people.’”

“In My Sleep”
EH: “When we did it, it felt like such a big Thin Lizzy moment, almost. We were like, ‘Oh god, it reminds me of being at home,’ that kind of music you listen to as a kid. And we put some uilleann pipes in there, which are an Irish instrument, and it really felt like us. It embodied that feeling of coming home after a tour. It just felt really natural to put at the end. It’s a send-off.”