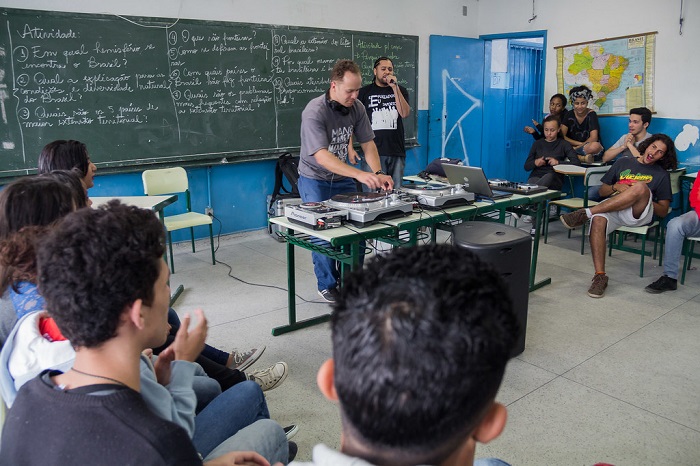 Scholars trace the origin of hip-hop to a “back to school jam” that DJ Kool Herc threw in an apartment in the South Bronx in 1973. Today the music genre is one of the most popular in the U.S.

In July 2021, Congress formally designated November as Hip Hop History Month.“ In recognition of the first year hip-hop history has a monthlong spotlight, The Conversation gathered four articles from its archives that highlight how educators and rappers alike are using hip-hop to educate and engage students.

From Jay-Z vs. Nas to Drake vs. Meek Mill, there’s no shortage of beefs among rappers. But one of the biggest feuds in hip-hop may actually be between rappers and America’s education system. Rappers have never been shy about using their lyrical skills to point out how U.S. schools miseducate students. As rapper Scarface plainly puts it in “Black Still,”

“[O]ur kids educated by the enemy / And they don’t know sh-t about their history / Cause they ain’t teaching that in school.”

Ironically, some rappers who initially turned their back on education have also invested money into education for others. Nolan Jones, an associate adjunct professor of education and a specialist in hip-hop education, writes about this paradox in an article about hip-hop’s complicated relationship with education.

For Jones, rap artists’ criticism of formal education serves to “highlight frustrations with mainstream education’s lack of a viable ethnic studies curriculum, which has proven to foster cross-cultural understanding, self-respect and diverse perspectives.” Edmund Adjapong – who refers to himself as a “hip-hop science educator” – says he used to think science wasn’t for him. That was until his high school physics teacher incorporated hip-hop into her teaching. In one lesson, his teacher used rappers’ chains to illustrate the motion of pendulums.

Adjapong, now an assistant professor of STEM education at Seton Hall University, writes on how to use the five elements of hip-hop – MC’ing, graffiti, break dancing, DJ’ing and knowledge of self – to get more students interested in STEM.

“While most studies focused on using hip-hop in science focus on Black students, I believe that using hip-hop can support all students, as hip-hop is the most popular genre of music in America,” Adjapong writes.

Hip-hop producers Dr. Dre and Jimmy Iovine are planning to open a school in Los Angeles that will focus on teaching students skills in entrepreneurship. Set to open in the fall of 2022, in a district that is 74% Latino and 10% Black, the school will provide a learning opportunity for students to apply their knowledge in the classroom to real life.

Hip-hop scholars Nolan Jones and Edmund Adjapong and career and technical education scholar Shaun M. Dougherty weigh in on the new school and what it represents for the American high school experience.

“Iovine and Dre’s proposed high school appears to embody knowledge and entrepreneurialism, which are considered two elements of hip-hop culture,” the scholars write.

“If this is successful, it is a great way to help students uncover their potential and hidden talents through experience and formal education. It is also a possible way to provide education that can be applied in the real world.”

Hip-hop artists have spoken about space exploration since the early days of hip-hop – from Sugarhill Gang’s “Rapper’s Delight” to more modern songs like “Reach for the Stars” by will.i.am. However, these lyrics about exploring the final frontier also deal with the lived experiences of African Americans on Earth.

For example, in A Tribe Called Quest’s song “The Space Program,” space exploration is used to talk about how America’s space program may exclude poor people and people of color.

A.D. Carson, assistant professor of hip-hop at the University of Virginia, lists some of the most interesting examples of rappers’ references to space. He argues that using these lyrics can bring cultural relevancy to the classroom.

Editor’s note: This story is a roundup of articles from The Conversation’s archives.