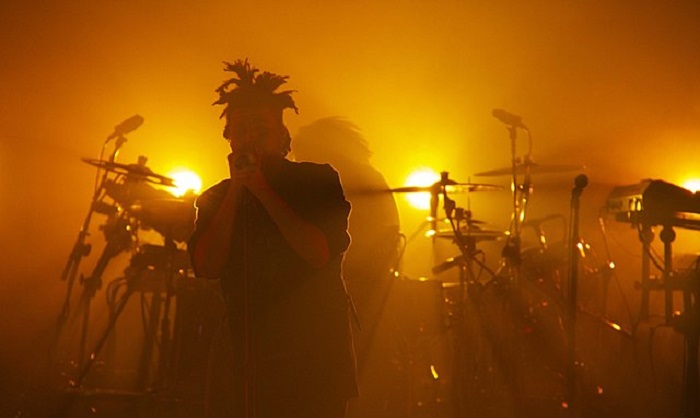 Our Sick Celebrity Culture And The Weeknd’s Changing Face

You might have seen The Weeknd’s altered face on the internet lately – either bloodied and covered in bandages or transformed by faux plastic surgery. With the 30-year-old singer set to perform at the Super Bowl LV halftime show on Feb. 7, it’ll be interesting to see whether he continues the act before hundreds of millions of viewers.

The changes to The Weeknd’s face didn’t simply appear overnight.

Rather, they surfaced as a slow crescendo, as notes in a larger arrangement.

Initially, there were facial bruises at the end of his “Blinding Lights” music video, in which an all-night bender ends in a car accident. He sported a bandaged nose for performances on “Jimmy Kimmel Live” in January 2020 and “Saturday Night Live” in March 2020. Later that March, the bloodied nose and lips appeared on the cover of “After Hours,” his most recent album.

He took the performance a step further while accepting two awards at the 2020 American Music Awards, showing up with his whole head covered in bandages, which worried some fans who assumed the bandages were real. When those bandages come off for the “Save Your Tears” music video, a face disfigured by excessive plastic surgery is revealed – a carefully constructed visage created using makeup and prostheses that make him nearly unrecognizable.

As an anthropologist who has been analyzing the societal implications of plastic surgery for over 15 years, I was struck by The Weeknd’s use of this medical practice.

What, I wondered, was he trying to say?

Initially, I’d assumed the bruises and bandages were a metaphor for The Weeknd’s struggle with drug addiction, a topic he has long explored in his music. He’s noted that, when scripting his music videos for “After Hours,” he was inspired by the film “Fear and Loathing in Las Vegas,” in which writer Hunter S. Thompson, played by Johnny Depp, often hallucinates or spirals out of control.

However, another key emerges in the videos from the “After Hours” album. In all the videos, people are constantly watching him, whether it’s the crowd of stiff, masked fans in the “Save Your Tears” music video or the frantic crowd reaching out to grab him as he tries to escape at the end of “Until I Bleed Out.”

In both cases, he seems to be comparing fandom to an unsettling loss of privacy, one where his very safety is at stake. It’s not that he fears his fans will hurt him. It’s more a commentary on how his celebrity status makes him vulnerable to a prying gaze at all times.

In his most violent music video to date – for the song “Too Late” – the themes of plastic surgery and fandom collide. Two wealthy white women with bandaged heads find his severed head and swoon over it, before deciding to murder a Black male stripper so they can attach The Weeknd’s head onto that muscular body.

The racial dynamics of the video are hard to miss: The women seem to exoticize Blackness and reduce the body parts of two Black men to objects that give them pleasure.

People love musical performances – or art, more generally – because it’s pleasurable to soak in the talented work of other people.

In the celebrity culture of late capitalism, however, artists are finding it more and more difficult to separate themselves from their art: The show continues after the work has been published or the performance has concluded. Fans feel entitled to access all aspects of their personal lives – even their bodies.

Communication scholar P. David Marshall has written about the ways in which the public assumes celebrities are automatically open to – or deserving of – scrutiny thanks to their fame. When their privacy is invaded, it’s simply shrugged off as coming with the territory.

Some celebrities, like the Kardashians, lean into it. They’re willing to expose themselves in increasingly invasive ways – whether it’s through social media or reality television – because they want to exploit the symbiotic relationship between media exposure, wealth and power.

But other celebrities, like Lady Gaga, have been forthright about the ways in which fame has harmed their mental health. Musicians like Sia and Daft Punk have gone to great lengths to hide their faces and protect their privacy, making it part of their act.

By using bandages and prostheses to hide his face, perhaps The Weeknd is also telling us that parts of his life are off limits – and should stay that way.

The Weeknd also seems to be acknowledging the immense pressures that celebrities feel to conform to unrealistic beauty standards. Celebrity journalism can be particularly cruel when famous people fail to measure up, with the paparazzi making a fortune off pictures that demonstrate celebrities as vulnerable or imperfect.

Feminist and literary scholar Virginia Blum has written about how celebrities are admired for their ability to transform and beautify themselves, and yet they also become canvases for harsh critique when it seems they’ve gone too far with plastic surgery or have aged ungracefully.

For celebrities, it can sometimes seem that there’s no pleasing anyone. By making those concerns with superficial beauty part of his art, The Weeknd seems to throw that mirror back at his listeners, asking them to reflect on the irrelevance of his appearance to his craft.