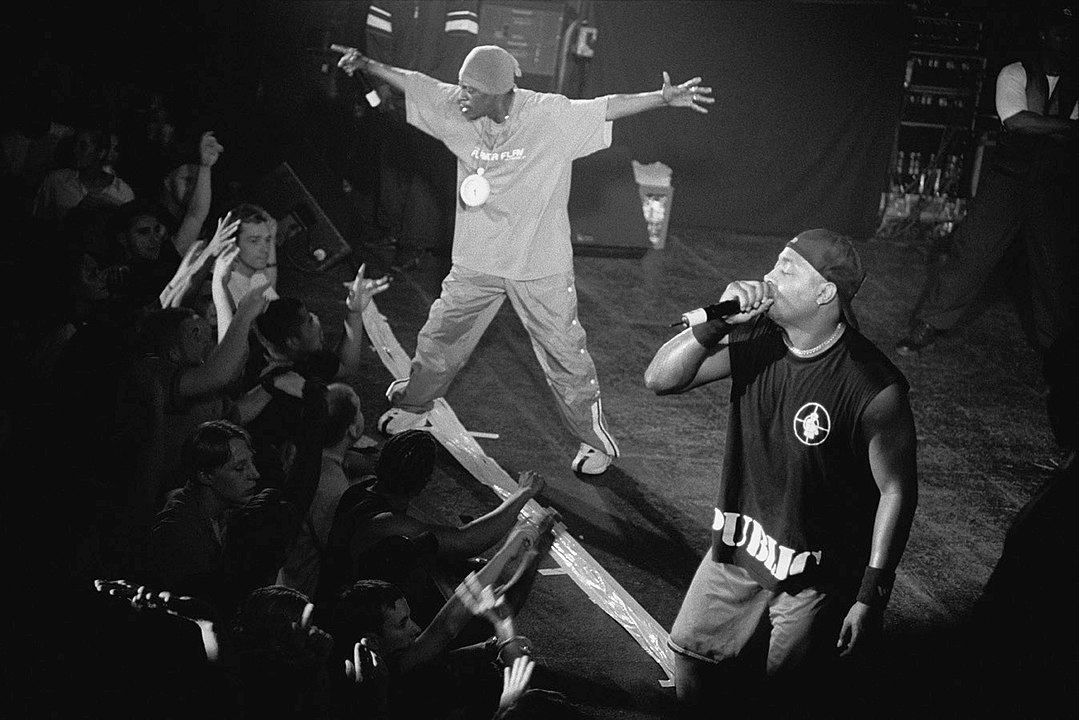 Black Lives Matter protests, continuing a tradition that dates back to the blues: Hip-hop is the playlist

The sound of Public Enemy’s 1989 song “Fight the Power” blared as face-masked protesters in Washington, D.C. broke into a spontaneous rendition of the electric slide dance near the White House.

It was the morning of June 14, and an Instagram user captured the moment, commenting: “If Trump is in the White House this morning he’s being woken up by … a Public Enemy dance party.”

Coming amid widespread protests over police brutality and structural racism in the United States, the song is an apt musical backdrop. It opens with a quote from civil rights activist Thomas “TNT” Todd before going into a sample-laden funk rap track referencing past black protest songs from the Isley Brothers and James Brown.

Demonstrators in other parts of the country similarly used hip-hop as a form of sonic protest. In New York, protesters chanted the hook to Ludacris’s 2001 song “Move B—-” as they were penned in on the Manhattan Bridge by police officers.

No one who has listened to hip-hop since its origins in the 1970s should be surprised that rap music has become the soundtrack to protests in the wake of George Floyd’s killing in Minneapolis on May 25 while in police custody.

Hip-hop artists have protested police violence in their music for decades. In the late 1980s and early 1990s, rappers from different corners of the United States described the brutal and discriminatory police tactics they witnessed in their communities.

In the Geto Boys’ “Crooked Officer” from 1993, the Houston rap group bears witness to racial profiling and police violence in the so-called Dirty South, before asserting: “Mr. Officer, crooked officer, I wanna put your ass in a coffin, sir.” In the same year, New York’s KRS-One referenced the racist origins of American policing in “Sound of da Police,” connecting the violent tactics used against enslaved Africans to the NYPD of the late 20th century and referring to an officer as a “wicked overseer.”

As a cultural historian who studies connections between race and music, I know that the rich history of protest in Black American music started much earlier than hip-hop. The tradition is as old as Southern blues and continued through jazz and rhythm and blues.

Take, for example, the “Joe Turner Blues,” a song that likely originated in the late 1800s. According to folklorist Alan Lomax, Black residents of the Mississippi Delta used the earliest versions of the song to describe a white sheriff named Joe Turner who sent Black men to chain gangs or to work on building levees.

The lyrics recount a lover’s tale of loss: “They tell me Joe Turner’s come and gone. Got my man and gone.” References to police officers in songs like “Joe Turner Blues” also link that tradition to the songs of enslaved Africans who warned about the slave patrols who combed the South in search of runaways.

As with hip-hop, protest against law enforcement came from communities of color in different parts of the country.

From east Texas, blues musician Texas Alexander describes false accusations of murder and forgery in “Levee Camp Moan Blues.” He laments, “They accused me of forgery; I can’t even write my name” – a statement that indicts both the segregated public school system of Texas and corrupt law enforcement officials.

Black musicians also made direct references to racial profiling and police brutality. Marvin Gaye tackled police violence on his 1971 album, “What’s Going On.” “Trigger happy policing” is one of the many social problems mentioned in “Inner City Blues (Make Me Wanna Holler),” and he demands, “don’t punish me with brutality” on the album’s title track.

Protesters also co-opted seemingly nonpolitical Motown songs as part of their struggle against police brutality. As uprisings against violent police tactics erupted in places like Watts, Detroit and Newark between 1965 and 1967, “Dancing in the Street” by Martha Reeves and the Vandellas became part of the soundtrack for urban protest.

Expressing anti-police sentiment in song is not exclusive to the Black American experience. Texans of Mexican descent have detailed their run-ins with law enforcement in Spanish for centuries through Southwestern corridos – narrative ballad songs.

Like much of the blues played by Black Americans, the corridos that emanated from the Rio Grande Valley in the 19th and early 20th century often described conflicts between Anglo-American law enforcement and Mexican Americans. “El corrido de Gregorio Cortez” recounts an actual event from 1901, when an Anglo-Anerican sheriff shot a man named Romaldo Cortez. His brother Gregorio then shot and killed the sheriff before eluding the Texas Rangers for 10 days.

Gregorio is celebrated as a hero who resisted Anglo-American domination: “They had a shootout and he killed another sheriff. Gregorio Cortez said with his pistol in his hand, ‘Don’t run you cowardly Rangers, from one lone Mexican.’”

Whether emanating from blues or corridos, Mexican and Black American music protested the ways that police buttressed white political, economic and social power. Similarly today, Latino activists point to shared concerns over race and law enforcement in their support for Black Lives Matter.

Meanwhile, recording artists are continuing the tradition of using music to protest police violence in communities of color. Los Angeles rapper YG released a single called “FTP” on June 4, in a nod to N.W.A.‘s “F— tha Police.” And hip-hop producer Terrace Martin likewise dropped a track, “Pig Feet” commenting on the current unrest: “Helicopters over my balcony. If the police can’t harass, they wanna smoke every ounce of me.”