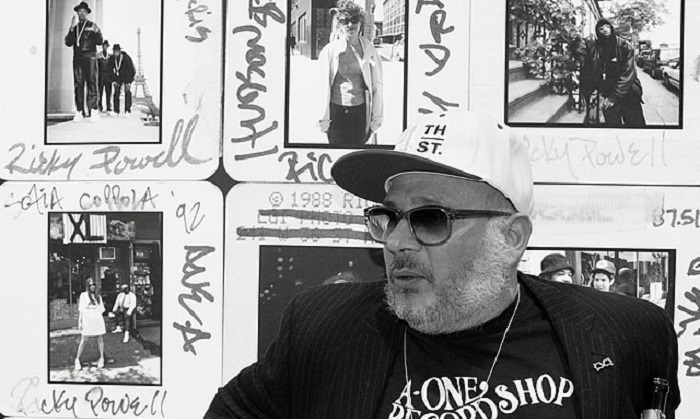 Powell was born on November 20, 1961 in Brooklyn, New York City. His mother Ruth Powell was a school teacher and did not know of his father. It is noted that his mother was a frequent visitor to downtown clubs and would have Powell accompany her as a child. He grew up in Greenwich Village while spending two years between 1973 and 1975 living in the Upper West Side. Powell attended PS41 with Rachael Horovitz, sister to Adam Horovitz, later known as Ad-Rock of the Beastie Boys.

Powell graduated with an AA in Liberal Arts from LaGuardia Community College and a B.S. in Physical Education from Hunter College.

Powell started out by selling lemon ices in the streets of New York after graduating from college. During this time he picked up photography as a hobby, taking pictures of friends and family. In an admission to the The New Yorker, he would credit an unpleasant experience with a girlfriend in 1985, for him to take up photography as a serious vocation. During this time he would photograph artists including Jean-Michel Basquiat and Andy Warhol in the streets of New York.

In 1986, Powell quit his job and tagged along with Beastie Boys on their Run-DMC’s Raising Hell tour. Some of the photographs that he took while on tour became significant, and Powell gained fame, becoming the unofficial “fourth Beastie Boy”. He toured with the group as Def Jam Records’ de facto in-house photographer on their Licensed to Ill tour in 1987 and Together Forever: Greatest Hits 1983–1991 tour with Run DMC and then again in 1992 on their Check Your Head tour and the 1994 Lollapalooza. Powell is famous for being featured in the song “Car Thief” on the Paul’s Boutique album, with the lyrics: “Homeboy throw in the towel, Your girl got dicked by Ricky Powell.” After being by the group’s side for over a decade, he separated in 1995 as the group was changing their style moving away from a rowdy tenor from their early days. Powell would say in a documentary that the group matured, while he continued to remain his old self.

Powell maintained a positive relationship with the Beastie Boys, including photographing them for Interview magazine in 2011

Powell was the host of the public-access television show, Rappin’ With the Rickster from 1990 to 1996, In the show, he interviewed stars including Russell Simmons, Doug E Fresh, Harold Hunter, Kool Keith, Rahzel, Laurence Fishburne, and Cypress Hill. He became the face of New York’s downtown party scene, connected to both musical and visual artists such as Sonic Youth, Jean-Michel Basquiat, Russell Simmons, Harold Hunter, Dondi White, and Sofia Coppola. He gave insights into the artistic phenomena of the day, with a combination of candid footage, impromptu interviews, and a vision of Powell’s New York. Powell considered the show “a time capsule of someone growing up in Manhattan during that era and being around the music scene”.

A DVD of Rappin’ With the Rickster, released in 2010, was declared a must-have by Juxtapoz.

Powell’s works were featured both domestically and internationally in a solo and group exhibitions. Frozade Moments, 1985–2003 ran at Bill Adler‘s Eyejammie Fine Arts Gallery in New York from July through September 2003. Public Access: Ricky Powell Photographs 1985–2005 exhibition was featured at the colette in Paris, the powerHouse Gallery in New York, Milk Bar in San Francisco, and Lab 101 Gallery in Los Angeles. His photographs and his signature street style at BRAVE Art, Whistler in 2006. The Ricky Powell Art Funk Explosion! was Presented at Sacred Gallery NYC in December 2010, and celebrated Powell’s guest curation of Frank Chapter 43: Bug Out!, which highlights his photographs and interviews with renowned street artists. His slideshow at New York’s All Tomorrow’s Parties music festival was highlighted by Billboard.

His photographs focused on New Yorkers. Powell considered the relationship between the photographer and the photograph to be “a chemical connection of some sort”. As the intrinsic qualities of the photograph changed after Powell began capturing moments, so did the subjects; later in life, he was more likely to “photograph strangers in his Greenwich Village neighborhood than multi platinum hip-hop acts and Downtown art stars”.

Powell died on February 1, 2021. A statement from his manager confirmed his death, from heart failure.