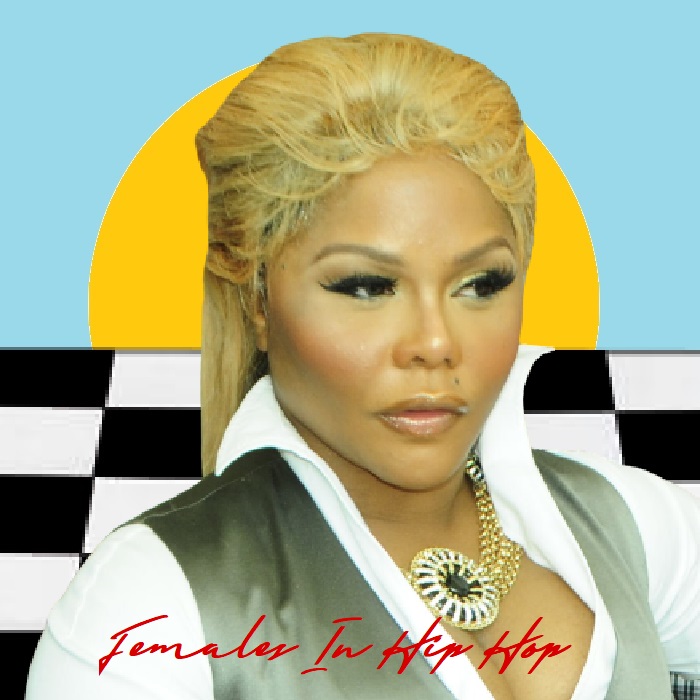 Artists such as Wu Tang Clan and Tupac Shakur brought international attention challenging militants to fight, thinkers to think, and DJ’s to turn the party out. Rumors would say that the female artist surfaced during the course of hip hop’s history. But the truth is the female artist arrived on the scene in the late seventies along with other male rappers. Lady B was one of the first female rap artists to record an album. When we talk about accomplishments, for a female hip hop artists to record a whole album not only proved to the world that she had skills, but potential to survive in a male dominated genre. Later on, other female rap artists would surface from the underground such as, Salt n’ Pepper, The Real Roxanne, Roxanne Shantae, Queen Latifah, MC Lyte (first to get a major record deal), Lil’ Kim, Foxy Brown, Lauryn Hill, etc… Although only a few surfaced from the underground, there are countless amounts of female talent that never made it into the big leagues. The question today is where is the variety pack? What happened to the female selection of hip hop CD’s within the local music stores, or DJ booths? When a girl desires to hear what a female has to say about a woman’s worth how can they find an album in which they can relate to?

Every female in the world has their own story. All women are not single or even desire to lead a single life. In fact according to statistics, 69.3% of American women have been married, divorced, widowed, or separated. 30.7% have never been married. With statistics rating so low, for single women it is amazing how most music is geared around those who lead a single and promiscuous lifestyle. When choosing a female hip hop artist that can relate to the real issues of life, record labels have failed us. There are countless amounts of men that do promote mental growth, knowledge, education, and understanding such as Common, Mos Def, 9th Wonder, and so forth. But today’s female artist seems to be more materialistic and immature mentally. That’s not to say that there are not a countless amount of men within the genre that are negative. But the fact is that there is a huge variety of men dominating the game on both sides, but few women are heard throughout the industry that promotes positivity through their lyrical content.

Hip Hop has become a league that’s almost equivalent to the law firms and medical fields during the 50’s and 60’s when females within those industries were nothing more than litigation secretaries and nurses who by the way did most of the real work. The music industry in the US does not teach young ladies of the future anything about surviving life. They are being taught that it’s OK to lower their standards in order to get ahead. Women are steadily promoted as booty shaking backup dancers, bitches, hoes, and materialistic self sufficient yet uneducated girls? Where is the realness in the industry that claims to keep it real? Although Rolling Stones Magazine crowns Nicki Minaj as the Queen of Hip Hop, it would be hard to prove that she is not due to the lack of competition. There are not enough female voices within the industry to even get the best results for the Best Female Rapper category during mainstream award ceremonies. When the majority talks about female rappers, we can only take a look back in times past to those that reigned well before this generation. If the female voice is going to survive within the world of hip hop, then they will have to present new faces that have never been heard or seen before. In times past, there were plenty of females who surfaced from underground. Of course, that was before capitalists and venture seekers got involved.

The fall of the Female Rapper

Most female artists in the late 90’s were often portrayed by males as a promiscuous gangstress that would do anything to protect the man who disrespected her continuously by calling her names publicly such as bitches and hoes. Although a decade has past, not much has changed since that era. The female that is presented to the public today does not have a backbone of their own, and is often degraded by men and presented as modern day concubines.

Today, activists could compare the modern day mainstream female hip hop movement to Saartje Baartman. For those that do not know the history of Saartje Baartman, she was a slave from South Africa that was idolized because of the size of her buttocks. They were so amazed by her appearance that they offered to pay her as a dancer. If she went along with this plan, she would be able to raise money for the poor tribe in which she belonged. Instead they deceived her and used her for their own selfish agenda.

According to former South African President Mbeki,“What followed was five years of exhibitions in museums and at fashionable parties, her spectacular buttocks and breasts bare, French and British men and women clustering around her, mocking her at the same time that her body made them uncomfortable with their own desire. Her days were punctuated by rape and scientific examinations.”

This is something that young black girls should be mindful of when conducting such behavior. Although the story of Saartje Baartman has been broadcast through stage plays, spoken word performances, blogs, and books, apparently it has failed to make its way inside the homes of urban women in America. According to African American history, black girls in times past have been blamed for rapes, abusive relationships, and accused of being weak willed and materialistic. When the popular culture promotes this type of image to masses of people, they give the world that same impression of urban women. That can be insulting not only to the average black female but her daughters as well. People perish continuously for the lack of knowledge. When they are not informed of the things that happened within their own history, they lose sight of their own cultural identity, and as an end result, they allow themselves to be used in a way that Saartje Baartman was used. Hip Hop labels, promoters, producers, managers, and so forth (black or white) feed young women false information on what it takes to make it as a female rapper. Their whole goal is to accomplish their own personal agenda. At the end of the day, when the industry is done using her, she is pushed to the side as if she is nobody as she watches mainstream producers and so forth gimmick her through someone else. (Lil Kim vs. Nicki Minaj) Even more than that, they monopolize from their so called beef. What’s more disturbing about it is that even black people, some which are educated continue to promote this image because they see it as a step towards success for themselves and the African American Community. But how does this affect the black community? In the year of 2010, there were 434,758 live births from parents ranging between the ages of 15-19 years old. That’s 41.5 live births per 1000 with African Americans having the highest rate according to the US Census Bureau. 63% of the teen population within the United States suffered an STD for the year 2010. African-American adolescents 13 – 19 accounted for 1,919 AIDS cases alone. (Respect Your Mind, Protect Your Body) Hip Hop Magazines, blogs, and so forth go out of their way to promote negative images of black girls because that’s what’s hot within the popular culture. Speaking out against things that affects the black community has become an act of hating and doing wrong has become the history of the African American culture according to the stereotypes that are often promoted through mainstream media. More than a few black men lead other cultures to think that it is OK to disrespect the average black girl in this manner. When others speak on it, racism is the levee that holds the propaganda in place which further gives political parties the motivation to mock blacks such as the President of the United States through stereotypes promoted in mainstream media. According to Eric Bolling of Fox News, Obama chills in the white hizzouze with thugs while popping forties.

Until the female rapper comes to the realization of how they are demoralized by mainstreamers, they will never develop a community like the males within the hip hop genre. Education is the key to surviving life. We would like to see the average female rapper not only become successful on the hip hop charts of America, but successful in all that they do in life. It is important for black women to stand up and speak out loud against those that market the negative images of themselves. Females need to create a movement letting the world know that they are much more than what is seen on television. All the way from Dj’s, Break dancers to emceeing, women have proved themselves in times past to be just as talented as any male. But who will support the strong females of today? Who will support the talent that everyone claims does not exist, but has a large community underground?

There should be someone who can talk to the girl with low self-esteem as she is a part of this world too. There should be someone who can council the poor at heart through their music, or open the blinded eye. To teach each is what rap intended. It was not created just to rock a party, and for those who say so, I would question their passion and knowledge of not only hip hop, but life in general.

What does it take to succeed as a female rapper in today’s industry? Lyrical skills no longer matter. In order to make it within the world of hip hop in times past you would have to have real talent. Now if a female artist puts on an outfit that promotes sexuality auto tune can make up in the areas where she lacks creativity. Lyricism no longer counts in a world that corporate America has taken over. It solely depends on how well you can dress or how much money you’ve made from your glorious hustling lifestyle. It seems as if women are no longer able to think consciously aloud. All black women are not uneducated, and many have decent paying jobs, college educations and live a positive lifestyle with her husband and kids. The big question is why do U.S. corporations continue to spread propaganda in hip hop/rap music throughout the face of the earth keeping urban youth subjected to an old crack epidemic lifestyle.

Word Life Production promotes cultural awareness within urban communities. We promote social change, social political justice, community empowerment, economic development, and diversity. Our mission is to teach members through our network how to establish themselves as an artist by providing them with resources, education, and encouragement with hopes that they will continue to work towards their goals. We also feature a host of unsigned talent that has already established themselves as Independent artists. We educate in areas such as small business management, communication, college success, and cultural awareness.