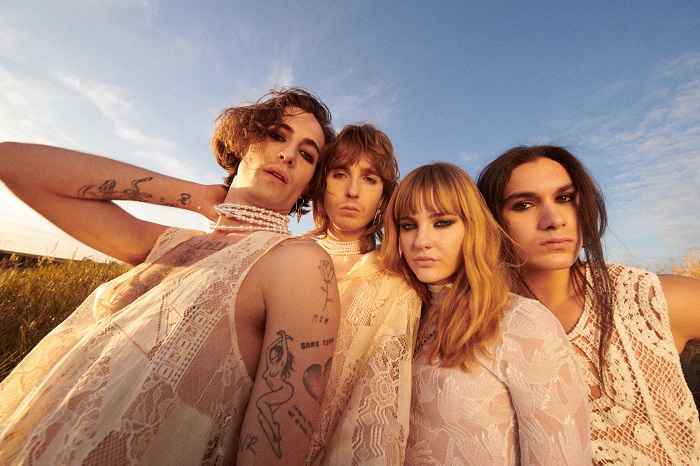 Måneskin Danish for ‘moonlight’) are an Italian rock band formed in Rome in 2016. The band is composed of vocalist Damiano David, bassist Victoria de Angelis, guitarist Thomas Raggi, and drummer Ethan Torchio. Performing in the streets in their early days, they rose to prominence after finishing second in the eleventh season of the Italian talent show X Factor in 2017. Their international breakthrough ensued when the foursome won the Eurovision Song Contest 2021 for Italy with the song “Zitti e buoni”.

The band have released two studio albums Il ballo della vita (2018) and Teatro d’ira: Vol. I (2021), one extended-play, and nine singles, which have topped the Italian and European music charts. They have collected 28 platinum and 7 gold certifications from FIMI (Federation of the Italian Music Industry), and have sold over one million records in Italy before their post-Eurovision breakthrough. In 2021, Måneskin became the first Italian rock band to reach the top 10 on the UK Singles Chart, with their songs “Zitti e buoni”, “I Wanna Be Your Slave” and their cover of The Four Seasons’s “Beggin'” reaching the top 10 on the Billboard Global Excl. U.S. chart, collecting multiple international recording certifications.

Members Damiano David, Victoria de Angelis, and Thomas Raggi first met each other as students during their high school days in Rome, with Ethan Torchio from nearby Frosinone soon joining them when they were inquiring for a drummer to complete the line-up. Although the band’s origins can be traced to 2015, it was officially formed in 2016 when the members had to choose the band’s name because they had decided to register for Pulse, a local music contest for emerging bands. While brainstorming, Victoria de Angelis, who is half Danish, was asked by her bandmates to toss out some Danish words, and they agreed on Måneskin (“moonlight”), although its meaning is not related to the band itself. The Pulse Contest also marked a turning point in their career, since they had to start writing their own songs. The competition led them to perform at the Felt Music Club & School in front of 200–300 people, and they later went on to win first prize.

They later performed as buskers in the streets of the Colli Portuensi district of Rome, as well as in the historical centre of Rome, including in Via del Corso. One of their first live concerts outside their native city took place in Faenza, at the 2016 Meeting of Independent Record Labels. Approximately 30 people attended the show. After a trip to Denmark, during which the band also performed some live shows, Måneskin strengthened their cohesiveness, and started to play together for several hours a day.