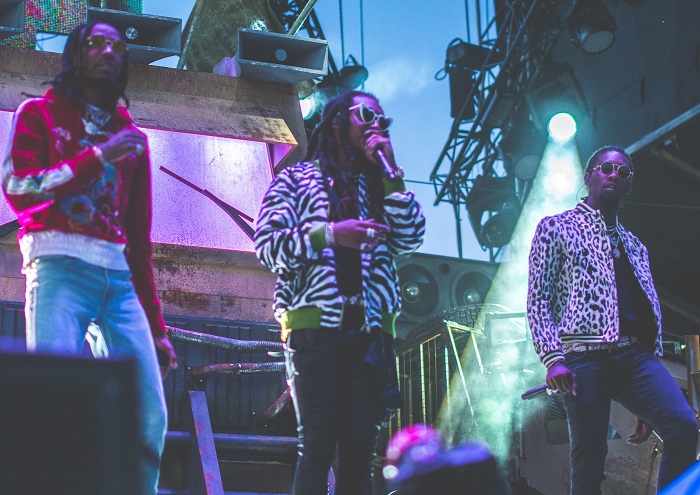 What Is Mumble Rap: Cultural Laziness Or A True Reflection Of Contemporary Times?

Mumble rap. Sorry, what was that?

Mumble rap – the most recent art form of rapping – or arguably the art of not rapping. Rather than rapping clearly, eloquently, articulately and with prowess and esteem, mumble rappers string occasional words together, like “cat”, “sat” and if you’re lucky, “mat”. And mumble rappers tend to do just that, they mumble.

And it’s catchy, which contributes to its popularity. A good example is the hugely popular American trio, Migos, who in May this year had an unprecedented nine songs in the US Hot 100 hit parade. The trio have embarked on a world tour which includes performances in Australia, the US and South Africa.

The term “mumble rap” is attributed to rapper Wiz Khalifa following a June 2016 interview on the American urban radio station Hot 97 FM. But artists such as Gucci Mane, Chief Keef and Future had been practising this genre of music for several years previously.

Culture as a joke

These comments really fuelled anger in the nation, and following some fiery exchanges, Pete Rock aimed a missive at Lil Yachty, his assumed alter ego Lil Boat and Young Dolph:

I’m a lil tired of people taking this culture for a joke.

But what really is the problem with mumble rap?

As a derivative of “Trap” (an umbrella term for hard Atlanta street rap), mumble is largely linked to the Atlanta scene. But lyrically it is quite different to the semantics and linguistics of Southern pioneering trap artists like Outkast, Cool Breeze and Ghetto Mafia who developed their style in the mid-1990s.

Trap refers to the creating and selling of crack-cocaine, the “trap” being the dwelling within which it is manufactured, sold and smoked. This context provides a narrative framework much reminiscent of earlier gangsta rap records popularised in the late 1980s by Eazy-E and his crew NWA, yet pioneered in the early part of that decade by artists such as Schoolly D, Funkmaster Wizard Wiz and Ice-T.

These formative styles of gangsta rap might appear to celebrate drug dealing, pimping, gangs and the materialism of money, cars and jewellery. However, records like Funkmaster Wizard Wiz’s “Crack It Up” and Schoolly D’s “P.S.K.- What Does It Mean?” serve as narrative driven ethnographic and autoethnographic studies, effectively, they are social commentaries based on real events, people and experiences.

These narratives also intertwine strong metaphors as in Ice-T’s expansive “Six in the Mornin’”, where Ice undertakes the role of the dealer narrowly escaping a bust, but takes solace in hip-hop as part of everyday life.

So is it mumble rap’s omission of clever, eloquent storytelling and wordplay that is disliked by the older hip-hop community?

The lackadaisical delivery and lyrically sparse approach that a majority of new wave mumble rappers such as Migos and Rich Homie Quan practice clearly upsets fans of hip-hop’s golden era great emcees – the likes of Rakim, Big Daddy Kane, and Q-Tip – whose flows (delivery) were paradigm-shifting, and whose delivery was precise and professionally effortless.

Furthermore, the sociopolitical awareness that eminent emcees like Chuck D, Poor Righteous Teachers and Tragedy Khadafi bring to the consciousness of hip hop is clearly absent from mumble rap. From Brother D’s “How We Gonna Make The Black Nation Rise?” released in 1980, consciousness has, to a greater or lesser extent, played a key role in the evolution of rap vis-à-vis its social and political context.

But what if the current cultural context is informing the production of mumble rap? In the contemporary western world daily life is fuelled by widespread consumption – of both products and images. They in turn saturate social media in an attempt to raise social status, a process that is itself highly disposable, and filled with bite-sized snippets of communication in the form of emojis and text abbreviations.

Creativity born out of boredom

To understand mumble rap I think it’s useful to consider the thoughts of cultural theorist Paul Virilio. He philosophises on the ideas of the dromosphere – the sphere within the evolution of humanity where speed inevitably causes the accident – and the picnolepsy – an almost epileptic consciousness generated by the perceived speed and immediacy of the world. Cultural cause and human experience both are interlinked.

As the dromosphere becomes heavy with information, people’s physical experience slows down in a bid to absorb as much as possible. When life becomes devoid of speed, gaps appear between the slowing down and fast pace of information, triggering a picnoleptic consciousness. It is within these voids and this consciousness, I would argue, where mumble rap is created.

Mumble rap is a negotiation that offers relief from the invisible acceleration of life, yet concurrently praises the disposable production-consumption model that ignites this acceleration in the first place. It is creativity born out of boredom.

To this end, mumble rap represents much more than at first it may appear. The picnoleptic experience is channelled through almost incomprehensible lyrical delivery, while locating certain tangible status symbols and narratives (such as acquisition of money, speeding cars, and overseeing drug deals) meagerly in the lyrical content.

Mumble rap offers the opportunity to reassess what is of cultural value. Like jazz and reggae, hip-hop has a rich musical culture. Now nearing the end of its fifth decade, there is a place for all sub-genres and agendas. The old school needs to let mumble rap be what it wishes to be, and allow this new wave of rappers do their thing, not forgetting the broader social context which may be exactly why these rappers mumble.

Published in NEWS 2 and Streamapse Reports